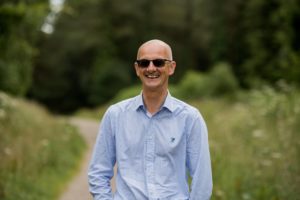 At Gosport Voluntary Action, we pride ourselves on the strengths of our diverse, ambitious and community-driven team to help make good things happen. In March 2022, we were thrilled to add to our combined skill-set through the recruitment of Finance Manager, Brett Gasser.

Having worked in Gosport for the whole of his adult life, and having lived here since childhood, Brett is a true Gosportarian with a genuine interest in supporting his local community. After completing his A-levels at Gosport’s St Vincent sixth form college, Brett began his career at Royal Naval Aircraft Yard Fleetlands. He then went on to hold various roles in Administration, Logistics and Planning departments, before being promoted into Finance.

Brett worked within the Management Accounts team, where their key role was to develop Financial and Commercial practices which enabled the eventual sale of the business from the Ministry of Defence to Vector Aerospace in 2009. Brett was the Finance Systems Manager at Vector Aerospace until 2015.

Prompted to seek out pastures new for a time, Brett and his (now) wife embarked on an exciting year of travels in 2015, initially visiting over 20 countries. During this time, Brett developed a love of photography, with a particular passion for landscapes and city portraits. Thanks to a natural talent and his ease with filters for long exposures that create dream-like, surreal images, many of Brett’s photographs have featured in photography magazines. Brett has also won several photo contests, and has developed a strong following on social media.

“I am looking forward to bringing my skills and experience to my new role. Having lived in Gosport all my life, it’s an honour to join the GVA team in their support of the local community.”

Needless to say, we’re thrilled to have Brett on board, and we hope you’ll join us in wishing him a warm welcome to the GVA community!