On 12 September, Good Causes, winners, grant recipients and friends of Gosport Community Lottery gathered at The Alverbank Hotel to celebrate the one-year anniversary of this highly successful fundraising opportunity.

Over the course of the year, more than 1,400 prizes have been awarded, including free tickets, up to £250 in cash and special bolt-ons, many from local organisations such as The Boathouse Bistro, The Ritz cinema, HMS Sultan and the Hovercraft Museum.

The Mayor of Gosport, Councillor Kathy Jones, expressed her gratitude to each of these local businesses for their generosity and said “When I have been covering the many charity and public events since becoming Mayor in May, I never cease to be amazed at the generosity and sense of charity that this community has for one another.  So today I am saying thank you to you if you have purchased a ticket and congratulation if you have won.  Because by your support so many charities have ‘WON’ too.”

MP for Gosport, Caroline Dinenage, kindly revealed the grand total of funds raised for the Gosport community so far, an impressive £38,538!

Much of this money has been paid directly to the 52 registered Good Causes, which have been nominated by Lottery players to receive 40p from their £1 ticket.  The remainder was allocated to the Gosport Community Fund, which awarded nine grants (£6,360 in total) to local organisations and individuals in July. 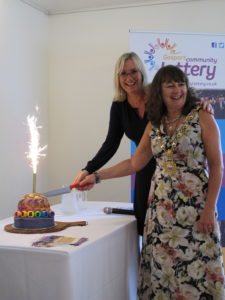 One of the recipients of these grants was the Friends of Leesland park, who held their annual Parkfest event on the weekend following the Lottery’s anniversary.  Perfect weather meant the event was successful, well-attended and thoroughly enjoyed.

Councillor Stephen Philpott, who oversees the board that supports the lottery, said the council was ‘really pleased the lottery was doing so well’. While Ian Reeves, chair of GVA, said: “We’re thrilled to have been able to launch and grow the Community Lottery and offer local good causes a new way to raise funds with the local community and further afield.”

Gosport Voluntary Action would like to thank Gosport Borough Council, Gatherwell and all those involved in making the first year such a resounding success! Special thanks to The Alverbank Hotel for the wonderful venue for the event and their ongoing support and Ware Photobooths, for their generosity in providing the photo/videobooth. Some fantastic videos were captured on the day and these will be available shortly.

To buy Lottery tickets, sign up as a Good Cause of find out more, please visit www.gosportcommunitylottery.co.uk or phone 02393 190222. 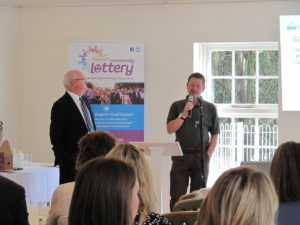 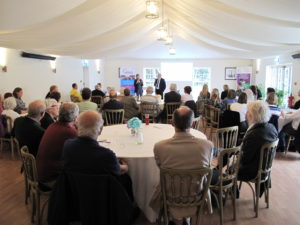 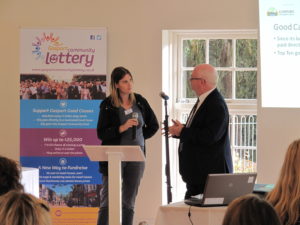