Four worthy groups received grants and Ian Reeves, Chair of Gosport Voluntary Action who manage the lottery, said “the community grants are made possible by the fantastic support the Lottery has received since its launch.  It’s great to be able to provide funding to these Gosport good causes and we look forward to hearing about the difference the funding has made.” 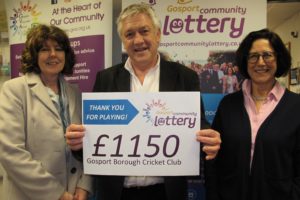 Gosport Borough Cricket Club received a grant of £1,150 to install a park bench in Privett Park to pay tribute to their longest standing member, Ron Cross MBE, Legion d’Honneur who will celebrate his 100th birthday this coming June. The grant will also fund an inclusive community event, to celebrate Ron’s life and the incredible contribution he has made.

Barbara Cooke, Secretary of Gosport Borough Cricket Club said “We want to remember the contribution Ron has made through his life from serving in the DDay campaign to chairing the Stroke Association and much more besides. He still visits the ground to watch games and still gives talks on DDay and he’s truly inspirational. We are so pleased to be able to provide the bench and celebrate together, while also encouraging local people to learn about Ron’s life and the Gosport Borough Cricket Club.” 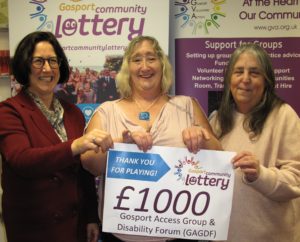 y Forum (GAGDF) are a well-established group who help to make Gosport as inclusive and accessible as possible to all people, regardless of any disability or impairment.  The group received a grant of £1,000 and having recently relocated to Alec Rose House, near Asda in Gosport, they are now ready to widely promote GAGDF, increase membership and encourage better participation in events.

“We are delighted to have received a grant and will put it to very good use with our marketing campaign. We’ll be increasing awareness of access and disability issues, running Open Forums and Social Pop-In sessions and further establish GAGDF as a ‘voice’ for people with access needs. For anyone wanting to find our more please visit www.gosportaccessgroup.org.uk or phone/text 07847 228394.” 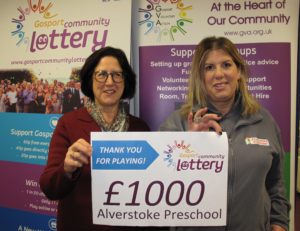 Alverstoke Preschool, a registered charity, operating from Thorngate Halls, received a grant of £1,000 to update their outdoor area, which is currently open to the elements so restricts outdoor play. The grant will provide wooden shelter in the garden to protect from rain and sun, so the children can use the outdoor space all year round.

Suzie Sidgwick, Director of Alverstoke Preschool, said “Our children all love to be outdoors, whether it be playing in the sand, water, in the mud kitchen or simply playing games. The garden refurbishment will mean the children will be able to be outside as much as possible and for many years to come!”

The Globe, Gosport’s free, online weekly newspaper received a grant of £709 to run a marketing campaign so they can increase readership, community awareness and information exchange as well as revenue through advertising. 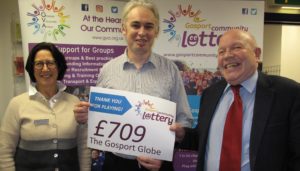 Globe founder and managing director Robin Young said: “Ever since it started, we have been grateful for the monthly dividends we receive as one of the local ‘good causes’ supported by the Gosport Community Lottery Fund. They have been a valuable addition to our income, particularly at a time of fluctuating revenue.

“However, the grant we have now been allocated is potentially a game-changer. We have an average readership of about 2,000 each week and this award will enable us to reach a far larger audience through a sustained promotional campaign. That will help us to attract more advertising and make significant progress towards becoming financially self-sufficient as a community interest company.”

The Gosport Community Fund, distributes grants from the funds raised through the Gosport Community Lottery, which was launched in July 2018 and is managed by Gosport Voluntary Action and supported by Gosport Borough Council. For each £1 ticket players purchase, 40p is paid directly to Gosport good causes and 20p is held in the Gosport Community Fund, which awards grants annually. A funding panel was formed to assess the applications, which included a broad range of representatives and the awards were also signed off at Gosport Voluntary Action’s Executive Meeting.

The lottery continues to make real difference to the local community. An amazing 96,213 tickets have been purchased since it was launched and it has raised more than £55,000 for Gosport good causes. To date, winners have received prizes to the value of £16,308 and have a 1 in 50 chance of winning a prize each week, including a £25,000 jackpot!

If you would like to find out more about playing the lottery or becoming a good cause, please visit www.gosportcommunitylottery.co.uk or contact Gosport Voluntary Action on 02392 583836 or lottery@gva.org.uk 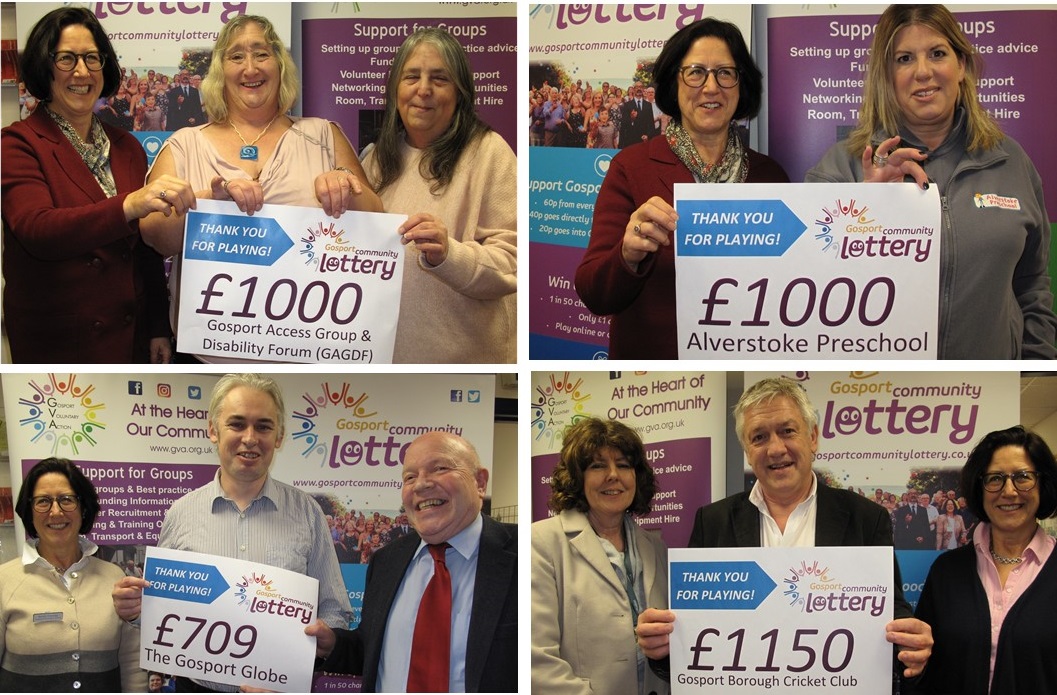