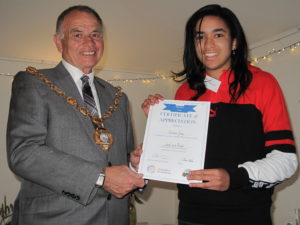 Volunteer, Chelsea Garry (from the organisation Level Up Gosport, formerly known as Loud and Proud) being presented her volunteer award by The Worshipful Mayor of Gosport, Cllr. Jamie Hutchison. More pictures at bottom of document.

The Gosport Volunteer Awards ceremony – an event organised by the local charity, Gosport Voluntary Action (GVA), with financial support from Gosport Borough Council – took place at The Alverbank Hotel in Gosport, Hants, on Weds, 1st June. Some 120 people attended the event, to honour and celebrate the achievements of local volunteers who give their time and skills on a regular, long-term basis, to help improve the lives of local (and often the most vulnerable) residents within the Borough of Gosport. The ceremony took part on the first day of the UK’s 38th annual Volunteers’ Week, and helped to kick off the ongoing #MonthofCommunity celebrations – an initiative launched by the national organisation, NCVO, to say thank you to volunteers across the country, and to encourage us all to think about, and join in with, activities happening in our local communities.

Over 110 volunteers, representing 24 organisations, attended the event to receive their awards for one, five, ten or 20 years of voluntary service. Taking into account those volunteers who were unable to attend the event in person, and who chose to receive their award in the post, more than 200 local volunteers were nominated as Gosport Volunteer Award winners. The ceremony was opened by GVA Chief Executive Officer, Kay Hallsworth, who shared stories of the volunteers’ successes and achievements throughout the evening. The Worshipful Mayor of Gosport, Cllr. Jamie Hutchison, personally congratulated and handed out the certificates to each of the 120 award winners at the ceremony. The event was also attended by Dame Caroline Dinenage and the Mayoress of Gosport, Mrs Karen Hutchison.

As the first Gosport Volunteer Awards ceremony in two years, due to the impacts of the Covid-19 pandemic, this year’s long-awaited Awards ceremony was greatly enjoyed and appreciated by the attendees. Many of the accolades celebrated the contributions of volunteers throughout the Covid-19 crisis (as part of the highly-acclaimed C-19 Crisis Response Team, coordinated by GVA and Gosport Borough Council, which supported more than 500 local residents with shopping and prescriptions during the Covid lockdowns). However, stories and achievements of organisations and individuals from a broad spectrum of Gosport Borough’s voluntary, community and social enterprise sector were formally recognised throughout the evening.

Kath Preece, Information Assistant Volunteer for the local charity, Age Concern Gosport, received an award for her five years of voluntary service. At the ceremony, Kay Hallsworth, GVA CEO, shared the reasons for Kath’s award nomination, as submitted by one of Kath’s team-mates:

“Kathy is an inspiration to us all with her boundless energy. She never fails to surprise everyone with her adventures, including recently abseiling down the Spinnaker Tower to raise funds for charity. Kathy remains committed to her voluntary role with Age Concern Gosport and continues to help people within the Gosport community. Thank you, Kath, for all your support and the valuable contribution you give to our community.”

A ‘Lifetime Achievement’ Award, honouring an incredible 20 years of voluntary service, was awarded to: Sue Archer and Neil Archer from the 2nd Gosport Scouts in Rowner, Gosport; Malcolm Dent, Carol Dent and Lesley Mason of The Gosportarians; Colin Davey from the Rotary Club of Gosport, and Terry Hinkley, for 25 years of delivering free guided tours for Gosport Heritage Open Days.

Kay Hallsworth, Chief Executive Officer at Gosport Voluntary Action, commented: “What a fantastic evening celebrating the invaluable contributions of Gosport’s local community. Without volunteers, a huge number of organisations would cease to be, and the most vulnerable in our society would lose a valuable lifeline.”

Kay added: “I would like to thank each and every person who took the time to recognise their volunteers for these awards. In times when everyone is struggling financially, it is important that we find ways to recognise and reward people for what they do, and this is a simple way for organisations to do so.”

Hampshire County Councillor, Lesley Meenaghan, who won an award for her role as a volunteer in the C-19 Crisis Response team, commented: “It is no exaggeration to say there is in Gosport an army of volunteers who work tirelessly for others. I was both humbled and inspired by those volunteers, some of whom have given over twenty years to helping others. Moreover, by giving, we receive so much back. To help others is both an honour and a privilege.”

Thanks were given to Gosport Borough Council for their ongoing support, as well as to The Alverbank Hotel for generously hosting the event, and making the guests feel so welcome at their beautiful venue. Thanks and gratitude were also expressed to GVA Trustee, Julia Goulding, who painstakingly wrote each individual certificate with her beautiful handwriting, and to The Worshipful Mayor of Gosport, Cllr. Jamie Hutchison, for individually signing and handing out each of the certificates.

If you might be interested in joining Gosport Borough’s ‘army of volunteers’, and making a tangible, long-lasting difference within the local community, please contact GVA Go Volunteer Coordinator, Tanya Egan, on tanya.egan@gva.org.uk / 02392 583836, or visit the GVA website to explore a diverse array of volunteer roles available: https://www.gva.org.uk/individuals/volunteering/go-volunteer/

To learn more about National Volunteers’ Week, and the ongoing #MonthofCommunity being celebrated across the nation throughout the month of June, please see:

Gosport Voluntary Action (GVA) is a registered charity and the umbrella body (Council of Voluntary Action) for Gosport and surrounding areas. GVA’s mission is to support and deliver services to local voluntary and community groups (by assisting with governance issues, finding funding, recruiting and managing volunteers and accessing training, among other areas) in order to make a positive difference to Gosport Borough residents. GVA is passionate about improving the quality of life for all residents of Gosport, but in particular those with disabilities or who are disadvantaged in some way.

For more details about the event, see this press coverage from The News 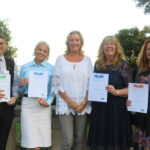 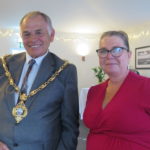 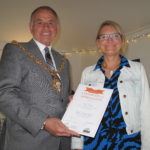 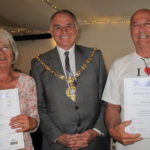 Carol Dent and Malcolm Dent (The Gosportarians), who both received a lifetime award for 20 years of voluntary service, standing with The Worshipful Mayor of Gosport, Cllr. Jamie Hutchison. 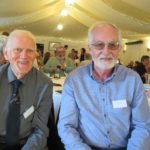 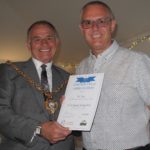